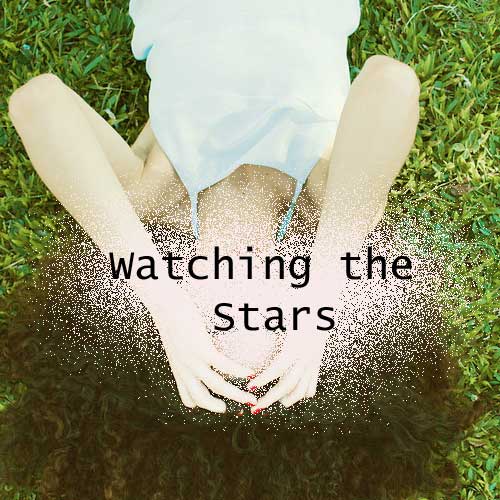 “What are you doing?” He sat on the grass, slightly damp, next to where she sprawled, hair fanned out behind her like a somewhat tangled halo.

“That’s a lie.” It was the proper response, a game they played, forcing each other to be more truthful, more specific, or at least more honest with themselves. The stars were barely visible in the twilight sky of mauve and cerulean.

She sighed. “Trying to watch the stars. But all I can do is get lost in my thoughts. Everything is terrible.”

He eased himself down to lie alongside her, lacing his fingers through hers. He sought the right words, ones that would not hurt her worse than she was already suffering. “You still can’t write.” More an acknowledgement than a question.

“My muse is gone. My source has dried up. I’m bereft.” She stopped as if tasting the word and liking the feel of it against her tongue. “It’s almost like being dead,” she offered after a pause. “Living without meaning. Like trying to read a book in a language you don’t know. Like all the colour has gone from the world. Like a TV programme where the sound’s gone off and there are no subtitles.”

He listened to her try to describe the indescribable. Only when she’d run out similes did he say gently, “That must suck.”

He felt her nod, her head scraping against the ground.

“People don’t help,” she said. “They say my worth is elsewhere.”

Not so much people, as, most likely, Lynn. He wished she wouldn’t listen to a word that came out of Lynn’s mouth. They were never nice words. There were a lot of “you would be happier/a better person if you were a mother” speeches that always left her angry or unhappy. Not what she ever wanted or needed, and especially not right now.

He tightened his grip on her hand as a gesture of comfort and she went on, “What makes us different to animals, what makes us human is that we can create more than offspring.”

He considered this. “We create pollution too. Invent a railway, burn coal, dump carbon into the atmosphere. It’s not all…altruistic.” Not the right word, but close enough.

“That’s not the same. Not the point.”

It had been worth the attempt to distract her. He tried a different approach.

“That’s your worth, then? To create? To write?”

“Yes.” Emphatic. There could be no argument, none that she’d ever believe.

He sighed. “If I could, I would fix this. I’d hunt down your muse and punch him in the nose, and drag him back to you.”

That drew a short laugh. “My muse is female.”

Classically the Muses were, but then again she’d told him how the ancient Celts believed women should teach men and vice versa, and she had more male friends than female (he was one of her closest friends, he knew her well), so somehow he’d imagined a male muse. “Oh. I can’t go around punching women in the nose. Not even wayward muses.”

Where would you find an AWOL muse anyway? He rather imagined a dusty bar in a near ghost town, where the gold-rush had flourished and died, and all that was left was a few empty dwellings and an inn that never closed. The muses would be sitting inside, perched on barstools or huddled down at rough tables, hiding out beneath large hats and voluminous coats. Whereas muses who had been allowed time off got to sit sipping cocktails at a white sand beach or sherry in the grounds of a manor house. It would only be fair.

He returned his attention to her. “Oh?”

“No. It just happened. Or maybe it’s my fault. Maybe I wasn’t grateful enough. Maybe I didn’t write enough of the ideas she gave me and she got bored of me. Like if you don’t water your plants, they die. Maybe I let too many people try to twist my words into their own desires, warping my characters and shifting my focus. Maybe I deserve this.”

He squeezed her hand again, hearing the catch at the end of the sentence. “You don’t. And even if those things were true, you could get past them. Your muse isn’t some asshole you met in a café and now you can’t stand his hipster douchebag face any more than he can stand to be around you. Your muse is a part of you, and she can’t stay away forever.”

“You believe that?” There was a touch of hope amongst the teary words.

That she’d get her creativity back, that they’d been through this before and, gods help them, would probably go through it again? “Yes.”

She squeezed back, her chilled fingers warmer now from his consoling grasp.

“You could take some time off.” He kept his tone casual.

“I’ve taken time off. It’s been so long already.” The angst was back as quickly as he’d managed to dispel it. Damn, she was mercurial sometimes, but this was who she was and he’d be more worried if she wasn’t showing any emotion.

“I don’t mean moping. I mean structured time out.” Last time there’d been that poem, which had been raw even when finished and like dragging blood from a stone for her to write. Yet she’d written it, word by painful word, and that had broken the dam. “I’ll help. But not tonight. Tonight you can mope. You need to wallow and enjoy wallowing. Let yourself be sad.”

“I am sad.” She bit her lip. “No one else understands how much, or why. It’s like…the stars no longer shine.”

In fact the stars were shining brighter now as evening crept on, and he could see Orion’s Belt. She was crying now and that, he felt was progress. He squeezed her hand again but no more, letting her make the next move when she was ready. At last she rolled over, burying her head in his shoulder. He stroked her hair with his free hand, saying nothing, for no words were necessary. To lie on the grass, at one with nature, to be held, and loved; these were tried and true methods that helped her cope.

When she was done, she eased herself up, digging one hand into his shoulder. “Ow.”

“Sorry.” She sat back on her heels, tidying her hair with both hands, though the evening breeze hampered her efforts.

“Can we go inside now?” he asked, getting up from the grass, aware of damp patches at his shoulders. “Please?”

She shrugged. It was getting cool and neither of them were really dressed for colder temperatures.

He’d been shopping in preparation for such an occasion, and offered casually, “I’ll make us Irish coffee. With double cream. And, sacrilegiously, chocolate sprinkles.”

She nodded. “Lots of sprinkles.”

He took her hand, pulling her to her feet, and they went inside.

One thought on “Fiction: Watching the Stars”